United Hebrew is thrilled to welcome guest musicians Ben Romano and Orin Reynolds to the bimah on June 24th. Ben and Orin are well known GUCI songleaders and will bring us some terrific camp-style music. They will be joining Rabbi Bellows for his final Shabbat as rabbi before he heads out to his new congregation.

Ben Romano is a young, up and coming, Jewish musician who grew up at URJ Eisner Camp around the music of Debbie Friedman, Rabbi Noam Katz and Dan Nichols. For the last 10 years, he has been Songleading at camps and synagogues all around the country. He currently live in Washington, DC and released my second album Ashrei – Songs of Joy and Happiness in February of this year. Ben is also the founder of Sacred Space, a nonprofit organization that nourishes Jewish leaders as they hold space for their communitie

Orin Reynolds is a songleader, Jewish educator, and advocate. He was heavily involved in the Jewish music scene, stemming from growing up and songleading at URJ GUCI and singing with Hooshir, Indiana University’s premier Jewish a cappella group, until settling in Seattle with his wife and two cats. He now works full time at Kol HaNeshamah Synagogue in West Seattle, where he songleads, creates programming, educates, and coordinates the Kol Chadash project which seeks to address the rise of Antisemitism at a grassroots level. He is thrilled to be back in the midwest celebrating Jewish music! 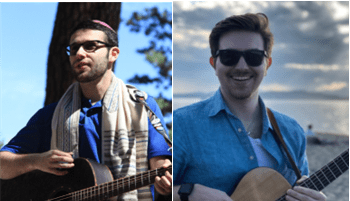